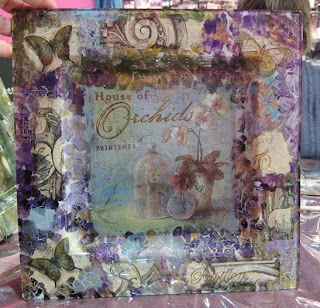 We had our local craft fair and I was lucky enough to go twice. I went on thursday on my own and arrived at the opening at 10 am and left at 6.30 pm, nearly closing time. I had a great day but was so tired on Friday......... and also on the 45 min drive home. I had not been out for a week because of the weather so it was a lot on my first outing.


I participated in two workshops. In one I made an enamel pendant on copper. This was fun but very fiddly and to do more you need an oven that gets very hot and lots of special powders. Though the prinicpal felt very much like embossing. We put some glue on the copper then put powder on it and shook off the excess and heated. We did this twice in clean and then we added colors. The tricky bit was moving the colors at the right time which the demonstrator did for us. She watched the oven and as soon as she saw the powder melt she removed it and used a metal skewer to move the colors around.


The second workshop was decorating a glass plate with napkins and paint. I used glue/varnish on the back of the plate to fix the napkin, then some crackle medium and then lots of different colors of paint. I used the enamel paints from folkart which once baked in the oven are dishwasher safe. It was a lovely effect.Here is a picture of it, very impressive isn't it.


There were not many stamp stands, well actually none lol. A few scrapbooking stands that had mostly clear stamps. I did buy a new edge punch from EK success which is really great. It folds down flat which makes it easy to store and punches wonderfully, even on thicker card stock. I bought a few tupperward dishes. Jeff bought me a new daylight lamp for valentines (I asked for it, lol, said it would last longer than flowers).


There was a big pergamano exhibition by the teachers in France which was very interesting. On the Sunday they even had some guests from Holland doing demos which means we stayed longer than planned as I got so interested in watching.


Well all our snow has now mostly melted and it is more rain than anything else but it has been announced that it will get colder next week.
Posted by Joanne

Oh Joanne, I LOVE this. I think you are going to have to give me on-line lessons for this! Fabulous. Jack xx

I am in love with the plate you've made Joanne. The colors your used are just beautiful.
Hugs,
Sylvia

This is beautiful!!!
I love the colors and the butterflies!!!

thank you so much for your comments, I am always still in wonder when someone visits my blog. The plate is not too difficult but takes lots of paints and the large plates are impossible to find :-)

This is such a cool creation. I love it :o)
Hugs,
Cabio 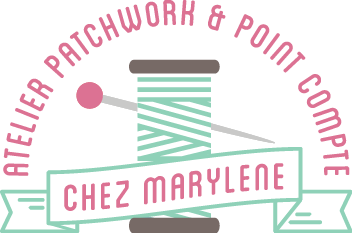 Me and Charly, my bichon bolonka

Joanne
Lorraine, France
I love making cards and have become addicted to rubberstamping. Here I would like to share some of these cards with you. Do not hesitate to contact me if you would like to know more about this fascinating addiction. I finally let myself be tempted by a blog, to share my love for crafts. I enjoy everything that is manual and creative. And though I don’t consider myself an artist I love to make things with my hands. I like to try everything and anything, so far I have made cards on the computer, rubberstamping, stencilling, iris folding, teabag folding, encaustic painting, cross stitching, embroidery etc…… And I love to try all sorts of paints, oil, watercolor, wax, onestroke painting, on wood, glass, ceramic, anything that doesn’t move :-)